Twice Upon a Time...Twins in The Family

In the spring of 2007, our daughter delighted us with the news she was pregnant the second time around. Oh goodie, I thought, maybe a little sister for our grandson. At 2½, the little guy lived 20 minutes away and was the highlight of our everyday lives. Born just weeks before our older grandkids moved cross-country, he filled the emptiness we felt after six years as hands-on grandparents.
It was a quiet afternoon about four weeks later when the house phone rang. My daughter usually used her cell so I was surprised to see her name on caller ID. “Hi babe,” I answered cheerfully.
Silence.
“Hello” I asked.
Then I heard a soft, timid-toddler voice whose words sounded like” mama” and “baybee.”
Or was it “baybeeees???”
Coached to repeat it louder, he made it clearer…“Mama has two babies in her belly!”
My brain was not registering what I’d heard.  “What does that mean?”I asked when Tracy came on the phone. Laughing and crying at the same time, she exclaimed, “Mom, we’re having twins!”
“Oh my God,” I screamed for my husband. He stared at me for a long time before it sunk into his head too. I sat down on the kitchen floor crying happy tears as my daughter and I went back and forth with a “two of this and two of that” kind of chant. 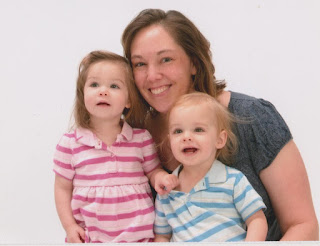 Freaking out was definitely the term.
They would have three kids under three!
Two more car seats times three cars (including mine) equals nine!
Two cribs,
Two changing tables or one?
Two baby swings,
Two highchairs eventually,
Two playpens, two rocker seats…. and on and on it went.
Anxiety and anticipation eventually gave way to confidence and joy as time went on; but mom and dad, two sets of grandparents, various in-laws and siblings constantly weighed in on the how, where and what of welcoming twins in the family.

As they prepared to buy double dollars worth of stuff, the most important question came from ME. ”What about color?” I asked. “Two blues, two pinks or one of each? Gender testing was scheduled for the next week.
With her first born, Tracy had met me in the baby department at Kohl’s for the big reveal. There she was, holding a little blue outfit…a boy! I agreed to find out the same way this time, near the newborn displays at Kohls. I’ll never forget her coming toward me with two similar outfits; one in blue and one in pink! YAAAY! How blessed we were! 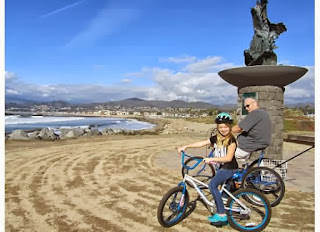 I decided it was time to quit working and plan for a brand new gig; two new babies were going to need grandma’s full attention. I retired from teaching after 33 years. Since my husband’s job enabled him to work remotely and the twins’ arrival date wasn’t ‘til December, we decided to celebrate by renting a cottage in southern California near our son’s house.
It was paradise. A cozy little beach house in a throwback beach town where we spent two months with our grand girls. Volunteering at their school, I became intrigued with the girls’ classmates. Namely, their names, the so-called California names. Sunshine, Shade, Phoenix, River, Bella la Bella and Davy Blue are a few that come to mind. This was also around the time Angelina Jolie and Jennifer Lopez were pregnant with twins. Celebrity shows and social media were full of speculation and wouldn’t you know…I got caught up in the name game too. Actors seemingly one-upped each other with outlandish monikers. Bear, Mowgli, Apple, Pilot and Calico.

I annoyed my daughter on a daily basis with the latest names I heard. (In my defense, I did respect her wishes for no rhyming names such as Barney and Marney or Jenny and Kenny) One day she emailed me and said enough! She’d let me know when they decided. I continued walking on the beach thinking about playing in the sand with two coolly-named kiddos someday.

During our last few days in town, I was browsing the gift shops along Main Street. Just as I picked up a couple of “I’m the cute twin” tees in the B is for Baby  store, my daughter called. “We’ve decided we love the names Rain and Storm,” she gushed.  I was thrilled! “Cool names,” I kept repeating and assured her it was wise to wait until they arrived to see which name fit which babe. Of course, the saleslady overheard and I over-shared, gushing way too much about helping these soon-to-be grandbabies have trendy names. She looked over her glasses at me and said, “I’m so sorry, dear.”  I bought the identical tee shirts and hurried home to tell grandpa and the rest of the family.

I emailed my teacher friends and gal pals back home, called my mother….a soon to be a great-grandmother of twins, and told the donut ladies at the coffee shop I visited each morning. Did I mention I was thrilled? We flew home at the end of October in time to have our grandson for the weekend, carve a pumpkin and buy Halloween goodies. I told the neighborhood trick-or-treaters Rain and Storm were going to be the most adorable babies ever.

When Tracy and I met at our favorite Mexican restaurant for lunch one afternoon, she nonchalantly mentioned they were rethinking their decision about baby names. She said, “Think about it, Mom. You were a teacher and must have rolled your eyes a few times,” referring to kids with weird names. I nodded. “Can you see Rain and Storm in our suburban Atlanta school?” No….I really couldn’t. When I acknowledged that the trendy name thing seemed normal on the west coast but silly in our corner of the world, she started chuckling. She laughed harder and shook her head saying, “I got you good!”
The light bulb went on. I suddenly knew she’d been joking the whole time. “Well played!” I said. We hugged and segued into the negative aspects of a kid called Storm. Would he/she be an angry, wild child? Would Rain be sad and cry a lot? I was a bit embarrassed that I’d believed her, that I’d never considered the consequences for the twins as they grew up. I promised I wouldn’t ask about names ‘til the newborns’ appearance. 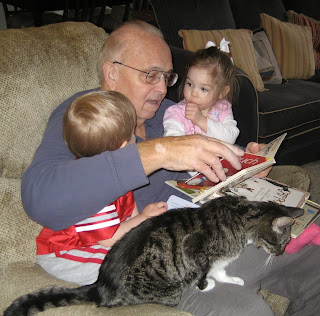 One week into December with the Christmas season in full swing, the day finally came! Twins require a scheduled delivery and we were off to the hospital. The other grandparents were there with our grandson, along with an aunt, uncle and cousins. When daddy came into the waiting room, we all stood up. “Big brother gets to meet the twins first,” he announced. Drew jumped into his arms and the rest of us sat back down. A half hour later he opened the door and waved the grandparents through.
Voila! There they were… a bundled baby boy in blue and a pretty pink-blanketed girl lying in mama’s arms. As she placed the ‘oldest’ in his paternal grandma’s arms, we were introduced to Lane Hudson. My arms reached out to meet Miss Paige Nicole. Two rockers, two grandmas rocking and two brand new babies being rocked! The grandpas finally got a turn as we played pass-the-babies around the room. We cooed at the ten little fingers and toes on each, the mass of dark curls on Paige’s head and the long blond wisps on Lane’s. It wasn’t long before I’d nicknamed these Christmas gifts Prancer and Dancer! 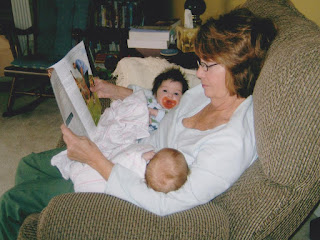 The frazzled parents took time to adjust and set up a routine. When my son-in-law headed back to work and Drew to preschool, it was my turn to show up for duty.  My favorite memory from those early days is Tracy sitting on the floor surrounded by books, reading aloud various passages on the feeding of multiples. Listening, I warmed the bottles of breast milk and settled on the couch feeding the babe in my lap with one hand and the one propped on pillows with the other. She looked up at me and said, “Thank you, Mom.” It was common sense in my opinion. They were both hungry at the same time. But at that moment we both realized it was going to be learn-as-you-go rather than following ‘how-to’ books. Dr. Spock did have good advice when it came to colicky tummy aches. Walking and rubbing Paige’s back as I hummed nursery rhymes soothed her many times. Looking back now, I so admire how my kids handled that first year. Getting three fed, bathed, loved and cherished while grabbing sleep whenever you can is the hardest but greatest job in the world. 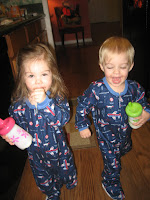 Drew was a bewildered toddler in the beginning, regressing to join the baby circus. But by 3 ½ he was ready to help entertain and care for the twins. Fetching diapers and this and that from the upstairs nursery is a mighty important job. 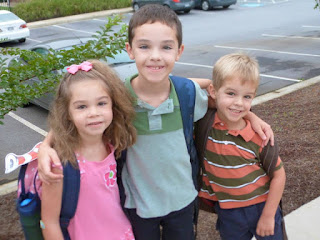 Today Lane and Paige are fifteen. They are finishing their freshman year of high school where Paige has earned a varsity jacket in softball and Lane plays baritone in the Marching Band and euphonium in Atlanta’s Youth Wind Orchestra..Paige is a social butterfly and a sweet friend to everyone. Lane idolizes his big brother and is often annoyed by his one-minute younger sister; but he's the peacemaker, the moral compass of the family. He’s witty, sensitive and street smart while Paige is an insightful thinker who likes to ponder every detail and leads by example. 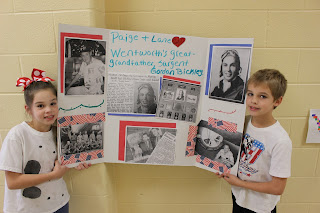 They love family history and made  me proud many  Veteran’s Days when they presented  a Social Studies project about their great-grandfather’s WWII experiences.

Watching these two blossom into young adults continually enrich our lives every day. They’re still double the trouble sometimes but mostly double the joy! We wouldn’t have it any other way.
Posted by Joan Stommen