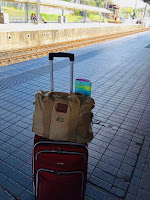 I managed with a carry-on size roller bag and a canvas briefcase. My backpack and duffel bag were tucked inside; ready for weekend getaways or day tripping.

2. EXCHANGE CURRENCY at a trusted bank
Airport and city kiosks will charge a fee. The big name banks give the best exchange rate with no fee. I had $300 American to exchange,and was able to get cash off my Visa card since my ATM cards didn't work anywhere. All I needed was my passport and credit card and about 5 minutes of the teller's time. Australian currency is different colors; making it easier to select the bill or coins you need.

3. FAMILIARIZE yourself with language and cultural differences before you depart 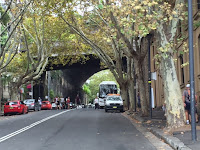 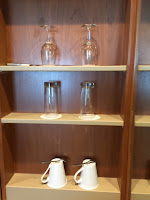 Countries that drive on the left also ride bikes and walk on the left. That means stay to the left when you're on footpaths, in airports and queues. Pedestrian crossings say Look Right.
Morning coffee is pretty much universal. Hotel and motel rooms provided an electric pot for boiling water; freeze-dried coffee and tea and containers of milk. Most rooms had a set of wine glasses...acknowledging that wine is best enjoyed with proper glassware!
English speaking countries use different terminology and expressions; don't be shy about asking for clarity; you'll soon find yourself using them too.

4. COMMUNICATION know how you'll keep in touch...both in country and back home.

Despite requesting international service before I departed, I was hit with a couple $100 fees right off the bat! I next tried switching SIM cards; but my carrier had mine locked! Instead of making calls back home to straighten out; I just used email, Facebook and Instagram messaging to communicate with my US and AU families...no worries! I did make an overseas call from the hotel once; cheaper than using my cell. Bottom line...call your provider, talk to a live person, read the small print!

5. ASK for help with a smile and a thank you. Graciousness is recognized worldwide 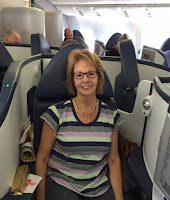 Traveling solo, I asked strangers to take my picture; usually I was able to return the favor by taking theirs. I contacted the hotel ahead of time; explaining my purpose and asking for off the beaten path, non-touristy places and activities. I had to ask servers for ice a couple times for swollen feet; how grateful I was when one delivered in a ziplock bag, another wrapped in bar towels.Vigilant about photographing children, I first asked permission of their teachers. It was granted with 'no worries'...the refreshing attitude of Aussies that I so love. These field trip kiddos were at the Harbor Bridge Museum. 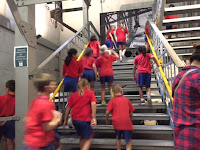 6. BE FLEXIBLE, be patient...many countries/people operate at a slower pace than Americans

7. EMBRACE the unexpected and spontaneous; wonder and wander about! 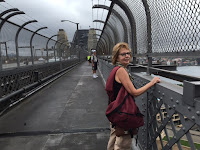 On the way from the airport to my downtown hotel, I realized I was too late for Easter Mass. I asked my cab driver if we could at least drive by St. Mary's Cathedral. He kindly stopped so I could take quick photos and step inside.
I did not want anymore long walks; but saying yes to this bridge walk brought happy tears as I realized this is where my husband walked so he could watch me climb the bridge in 2002. Spontaneity begets serendipity...often the greatest gift of travel.

8. LONG FLIGHTS are manageable....it's a mindset. Accept and adapt...you'll be fine.

I knew I'd be facing a long flight and prepared by wearing loose, comfy clothes, and packing necessities in a carry-on bag; change of clothes and shoes, medications, snacks and trial-sized everything.
I had no control with layovers, delays and cancellations...my big day of departure became an unusual situation. I adapted by making new friends and writing my first travel post about living in airports!
Flight attendants mentioned wearing compression hose; something I'll consider in the future. 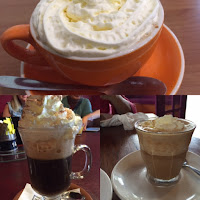 This was a big deal for me...a fussy, picky eater all my life. It started with asking for my morning coffee. Long Black? White Expresso? As soon as I explained I preferred coffee with milk or cream; the server appeared to understand. She brought  me a Vienna...strong coffee topped with whipped cream...like real cream whipped! It comes with a spoon and looks like a sundae...I was hooked! I stuck to familiar foods at first; beef burgers, fish and chips. But as the weeks went on, I needed variety. I tried lamb chops, duck, pot pies, and skinny red salmon slices...seemingly raw...in my salad. They were all delicious! Never ate lamb chops, duck or chicken pot pies in my life, and grilled salmon chunks with spinach are pretty much my staple at home. I noticed kangaroo burgers on menu listings, but no way!

10. REACH OUT to a concierge or public relations personnel before you go.

I was going as a travel writer this time; but in New York City, I was a nervous grandma taking a teenager to the Big Apple. I talked with the head concierge at least once a week for months. By the time we arrived at our hotel, I was greeted at the front desk with hugs and hand holding to ease my stay and worries. I call ahead to ask for low floors near the stairs and what kind of meals are offered on site. I learn so much more from a live person aiming to please than I do from chain websites. 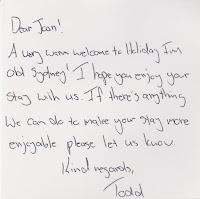 Wally in New York probably pictured a little ol' granny and was prepared to make me comfortable. Todd in Sydney found me in the lobby pub to see whom he'd been emailing with for weeks. Both of these gentlemen suggested places that were perfect for me!
Local knowledge trumps guide books in my opinion.