Making the Most of Airport Life

Day One was going to be a long one. Awake long before the six AM alarm; I decided to repack and leave out a few tees and shorts; I needed sturdy walking shoes and they take up a chunk of space. Next I quickly went through old family pictures to take for my brothers' grandkids and tucked them in my paperback book. Little did I know I'd be making new friends and learning new things before I ever left the country! 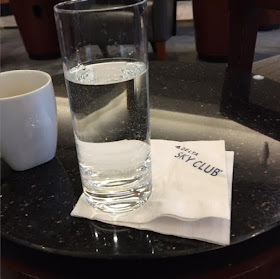 I arrived at Detroit airport at 9:30. My flight to LA didn't leave till 3:00. I was pleasantly surprised that my Delta first class international ticket qualified me for Sky Club; Delta's exclusive lounge for frequent travelers. I was Alice in wonderland awe. Free Starbucks, beer and booze. Breakfast, lunch and dinner buffet and several newspaper choices. Expansive, cozy seating areas, clean restrooms and luggage storage if you want to wander the terminal shops. As I stowed my bags in a locker to get some walking in, the front desk lady suggested a two-mile route around the terminal. If only I'd worn the walking shoes. I fast-walked in my khaki converse sneakers....which meant my feet hurt by day 2.

I must have flown to LA 20-25 times during the ten years my kids lived there; traveling from Atlanta...loving the freeways and Randy's Donuts sign as we landed every time. So as we began descending from Detroit, I was tickled to see the sunlit Santa Monica Mountains from my window all the way in! Another heart-captured Kodak moment.

Terminal 5 at LAX has been beautifully redone! Wow! Here I discovered not all Delta Lounges are the same.... Smaller capacity, no lockers...just leave-at-your-own risk shelves, but a fully tended bar!
I've since learned Atlanta offers private sleeping cubicles and massages in addition to the other amenities....but then ATL is Delta's home hub! 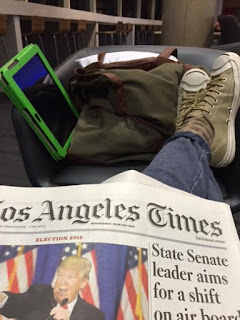 Tired and weary, I had five more hours to kill till my 10:30 PM flight. More walking, visiting with Aussies coming and going for their autumn break, and finally giving in to a free gin and tonic just before boarding time. Just as priority folks were getting settled, the pilot said oops...there's a problem with the engine; we're waiting for maintenance. After several delays, it was cancelled and we were rebooked for 9:00 PM the next night....another 20some hours. At 3 in the morning, it was too late to consider hotels and the gate agent said they were all booked within a 10 mile radius anyway.
I slept about 4 hours on a comfy Delta sofa.....until the morning shift began preparing for the day. My sweet new friend Susan and I shared plans about joining up with family.

I worked out it'd been about 37 hours since my alarm went off and my trip began. And I still had a 14 hour flight ahead of me. I stashed my bags, walked, ate as healthily as one can with airport offerings and made more friends among staff and travelers. I avoided the disgruntled folks and chalked it all up to part of the adventure. My feet began to swell and the Sky Club bartender gave me ice. I showered and changed my shirt and redid makeup, ate their buffet breakfast with fresh fruit and baked goods and I was ready for another day.

Delta compensated us with vouchers toward future travel; but being first class, I was luckier than Tom Hanks living in the airport!  I had the Delta Lounge employees looking after me. And...I received 50,000 bonus points for my discomfort and change in plans.
I was most impressed with all the terminal employees working that night; some stayed beyond their shift, blankets and pillows were passed out, lights were dimmed, free water and snacks were available and the workers did it all with smiles and cheerfulness.....even while confronted with unpleasant customers. Although I had Sky Club access, I walked and talked with folks everywhere; curious where and how they'd get through the chaos. Except for a few complainers, everyone felt as I did: It's always better to fly late and arrive safe! 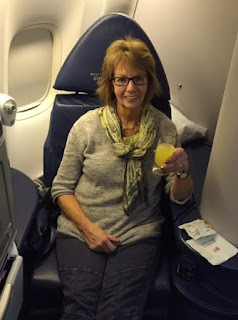 On board, I sat next to a Kid Rock lookalike and drank mimosas. I asked the flight attendant how the 9 buttons worked when it came time to lower the bed and she said "you can work it out love." And so after a full course meal about midnight LA time...whatever the heck time my body was on by now; I pushed away at the blue buttons,  unwrapped my fullsized pillow and thick comforter and finally slept stretched out on my side just like at home! After five hours I was wide awake....maybe still Detroit time? The bed pushed back up into a chair and I watched two movies, (Spotlight and The Big Short) wrote notes and drafts, walked the aisles from front to back and chatted with my new days-in-the-airport pals. 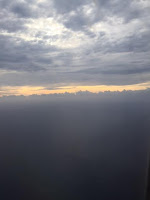 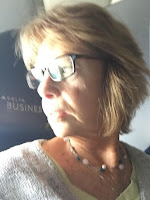 Weariness gave way to excitement as breakfast was served, we freshened up and watched the sunrise as we descended into Sydney. I left on Tuesday morning and arrived on Friday morning. Yes, a day is lost due to international travel....but it was definitely 3 days in airports and one on a plane!
I was down under the equator and another hemisphere and I was here!
I bypassed customs....a random selection process to facilitate arrivals and.... voila!
I'm outside walking in sunshine!