Why I Got Rid of My Husband's Things

After I made the decision to sell the house; I began looking at everything as a keeper or a give-away.
Most of my things will be sold or donated and when I'm relocated, I'll get whatever I need for a new beginning. But three things that mostly belonged to my husband are now gone...and here's why.

Even though he's deceased, I still ask his opinion and sure enough, he always guides me in making good choices. His favorite things are all in loving new places making someone else happy! This morning it was.... 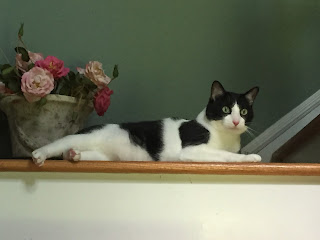 Burney now lives with my sister. I took him down the road to her large, rambling house in a wooded lot. He's been an indoor cat ...but she'll let him roam outside as soon as he's comfortable with her and his aging canine cousin.
I've never been a pet person. I learned to care about cats from my husband.....almost 50 married years with them in our lives. After our last one passed away, he decided one more cat was needed. He and Burney became best buds, but this black-and-white ball of fur quickly became mine as we both grieved in this lonely house. I'm thankful he snuggled with me on cold winter nights and entertained the kids by swiping and swaping toys, but now he'll have a much livelier life playing with a Golden Retriever and getting constant attention from my cat loving sister. Best of all, the grandkids can see both their favorite pets in one visit.

After a successful garage sale last month, I looked around and thought, how can I make this space hold two cars again? Make it more appealing for potential buyers? 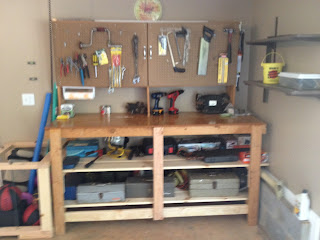 My son-in-law's parents recently moved from their home a few states away to our neck of the woods here in the south. One thing his father still needed? A workbench! This 18 year old make-it/fix-it/store-it spot was my husband's go-to place for everything. Paint stained and nicked from wayward saws, it was often cluttered with groceries, balls and just-in-case junk until it was cleared and cleaned again. The cupboards held seasonal things and the pegboard made it handy to grab tools while reaching across my big SUV. We stored our Holiday decoration containers underneath; but in it's new home.....the homemade workbench now has spiffy new shelves to hold garage treasures. My kids are certain their Dad is smiling down on his old friend getting a new lease on life! 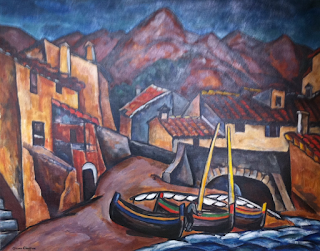 First to go was this original oil painting from the early 1900's. It hung on the wall of the lake house where he grew up; painted by an ancestor and already decades old when we married. We had several pieces of Oliver Chaffee and his wife, Ada Gilmore's work. The only one that mattered was this nautical scene of the coastal town in Collioure, France. It was perfect for our years living on inland lakes, then near the beach on the Atlantic.
Hanging alongside our big screened TV, I found myself staring at it one night instead of the shows I watched to take my mind off money worries. Do the kids and I still want it? Was there a buyer or museum that would appreciate this valuable piece of art? Researching potential interest, I found it was either the famed Provincetown art colony or our hometown in Michigan...also Ada's hometown! I'm delighted it's now in good hands and I can visit it when I'm settled back home.

Do you sense the timing? The positive outcomes? How my husband's help from above made everything work out for the best? I'm becoming stronger and more confident I know, but still....it's good to know he has my back from afar.