My grandchildren started saying no thanks to bedtime books when they slept over in favor of stories about their parents as little kids. Lately, they've been asking for tales from the days when I was a little girl! Yikes.....not always easy to retrieve on demand!  Thanks to my friends Bob at Axiesdad and Grandma Kc over at Amaraland who do such an awesome job sharing their childhood stories and memories; I am encouraged to do the same for my grandkids.....so here goes! 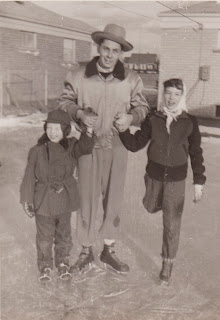 I learned to ice skate in my own backyard. No big deal if you grow up in the winter wonderland of snow and ice for months on end as I did in Michigan back in the 50's. Folks still do this today in the northern states....but those years of skating and sledding are some of my favorite childhood memories!

Every winter, Daddy would freeze the backyard; after first listening to weather predictions, checking the sky or conferring with neighbors.  If there was a big snow on the way; he'd wait and shovel and freeze the next night. Sometimes we were disappointed...our little rink with the banked up sides would be nothing but chunks of crusted snow or ice! He'd have to start all over again. He put as much time into getting it right at he did the summer gardens!

Here I'm a daring one-legged ten year old and my brother Dave is about six. Easy to show off when Daddy's holding tight! 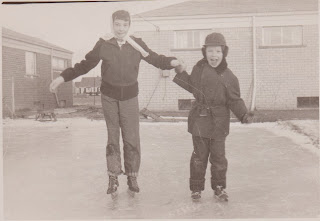 But not nearly as confidant am I alone with Dave.....he's about to launch ahead and I look a little leery; especially since it appears I've already fallen a time or two! Believe me...that look on his face spelled trouble!

Little did we know that not only were we acquiring a life time skill; but Daddy had an ulterior motive. Advertising was his game and creativity his name; he superimposed (is this even the right term today?) our fun photos onto illustrations from the art department and designed our Christmas cards year after year after..... 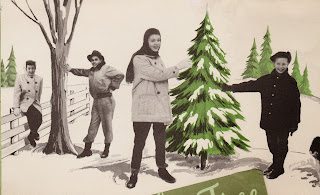 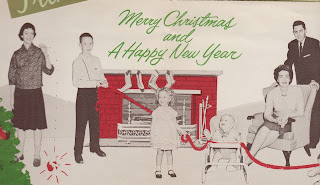 many more years! These cards were quite novel and a hit with all Mom and Daddy's friends. I was 13 when along came a sister; and two years later another brother. Our folks loved planning for these cards months ahead of time......just as many of us do today!  They stopped when I was half way through college...and Daddy changed jobs and had to be on the road a lot.

Dave and I love remembering those early years.....when it was just the two of us. Mom loved being outside too and I remember her skating so elegantly in her skirts or dresses. She'd pull pants up under them and tie on a colorful babushka and out we'd go to play in the snow. 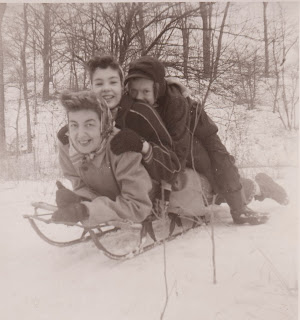 Yes, Mom was lots of fun.....but that's not why we love this picture. Dear Dave...we can still tell when you're up to something with those mischievous eyes! We may have been posing for another card idea....or just looking cute. But Dave had a snowball hidden in his hand......and that's why it's a crazy funny photo! I can't recall if he threw it at me..... or at our dad......but I do remember us all laughing so hard and so long.

This post has been linked to the Grand Social at Grandma's Briefs
Congratulations on your new gig, Lisa!


As my younger grandkids and I unpacked the red and green boxes that first year, ready to decorate the house and tree...the twins were concerned about Grandpa's Christmas stocking. 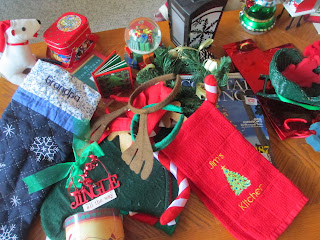 Santa has always stopped at Grandma and Grandpa's house every year, pretty much ensuring a second round for everyone.There'd been eleven stockings to hang for our five grandchildren, their parents and us. Making sure those stockings were filled with everyone's wishes was Grandpa's most important job; he used his awesome writing skills to let Santa know exactly how to surprise his family.

But as I considered returning his to the red container, little Paige shouted "no, you CAN'T put it back in the box, Grandma!"...while her brother chimed in that Santa would know what to do with it. They wondered if God tells Santa when people die. They thought they could take something from their stocking Christmas morning and put it in Grandpa's. They said mine would be sad without Grandpa's next to it.

Sharing these sweet comments with friends; I received the greatest advice of all...fill it with love!
I knew this was the perfect idea, but how? with what? It came to me during a sleepless night as answers often do....write him a letter!

The following week, each child wrote a love note or memory and so did I. Overthinking it again, I pondered the logistics of empty stockings hanging in anticipation, Santa's long, busy night and the early-risers rushing down stairs the next morning. "Just stick them in his stocking right now" said one of the twins. "Yeah, it will be a surprise for Santa and...he'll know what happened." whispered the other five-year-old. How wonderful children are at solving the quandaries of life!

Can you feel the comfort? Can you imagine how my little gesture helping the twins through this difficult time had in fact been quite powerful; helping me embrace that first holiday in 47 years without my guy. 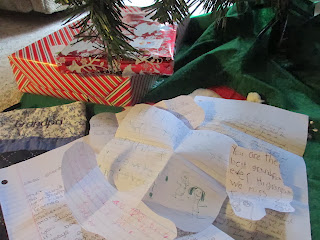 Alone, I read and reread them. I sensed the importance they felt in doing this. The older girls nailed it beautifully in their lengthy letters. They recalled his goofy stories and making them giggle over and over again; how he made them feel special for being who they were.

The oldest commended him for being a great role model; with his "great combination of high intellect and street-smarts" and how she loved swimming with him in her early years and learning to drive with him this past summer. Her sister was proud she has his writing skills and sense of humor! "You were perfect, Grandpa, because you were very wise and very funny" she wrote. They both know he is with them in their hearts. And I loved their promise to keep calling my home the Grandma and Grandpa's House!

The little ones' were shorter, but their I Love You with hearts and I Miss You with drawings of  Grandpa were just as meaningful! The colored ink and curvy, carefully cut edges around their notes make them extra special. These are my treasures now.

Ten stockings now gather around the tree on Christmas Eve (once filled, they become too heavy to hang I've discovered.) But Grandpa's hangs just fine by the fireplace...packed full of love.
After all the gifts have been opened, our attention and excitement will turn to the stockings. After they've been emptied.....with toys whirring and buzzing and candy and cookies crunching...we'll read and listen to Grandpa's letters and remember all the wonderful things about him!