I love having the grandkids spend the night! Ever since the oldest was little and started sleeping over......she would sleep with me in the big bed while Gramps slept in the guest room.  Same when her little sis came along, and then my grandson as soon as he was old enough! As the twins grew older, they took turns doing the sleep-with-Grandma-in-the-big-bed thing! 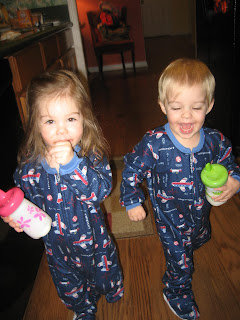 One night my little cuddle bug guy said he was going to "stick to me like glue" as he leaned against my back. Both he and his big brother like me to hold their foot while they fall asleep!  Another time, his sister said "you're the refrigerator, and I'm the magnet" as she snuggled up tight against me! Cracked me up!  But the older kids did the same thing. That feeling of warmth, security, love and devotion...... that special "Grandma and me time" feeling......greatest feeling in the world for both of us.
Sunshine always stroked my earlobe as she drifted off, Flower wanted to hold hands...and so does my little Pumpkin Jr.  She also loves patting my cheeks repeatedly. Those are pictures only the heart can capture!
As they all grow older, they like playing word games, telling silly jokes and hearing me tell tales of their parents when they were little! It takes a long time to get to sleep sometimes.......but it feels so good to fall asleep after giggling your head off! 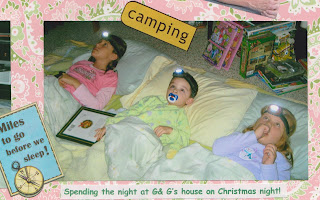 Everytime the five cousins got together for Christmas or during summer vacation……..we'd have a camp out on the living room floor! (Gramcracker got the couch!)  We had every blanket and pillow and flashlight in the house. Made lots of hand shadows of course and told silly/spooky/nonsense stories!  I loved that even the oldest got into it and became a “kid” again in the midst of laughter and craziness! She and her sister snuck off to their bed once the Littles were asleep...but I'd stick it out on our comfy old sofa till morning peeked in.
Posted by Joan Stommen 3 comments: